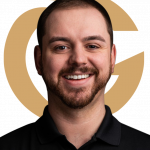 With a strong background in competitive industries, and competitive sports growing up, Travis has seen his face share of different situations. Along with coaching in the Alberta Junior Hockey League at the age of 21, Travis has also served in other roles such as Head Scout, and one game behind the bench for the Junior “A” league as Head Coach.

Professionally Travis has dipped his toe into many industries, all fascinating and unique. In 2016 Travis joined Legend Rings as the first hire by the company CEO. Within 4 years he helped develop an internal system that lead to 750% of growth in revenue. Travis also worked with several large programs such as the National Women’s Hockey League, Harvard Men’s Ice Hockey, Indy Pirates (Featured on Netflix’s Last Chance U), and the Prince Albert Raiders. By the time of his departure in 2020 Legend Rings was an industry leader in Championship Rings.

Approached by CWS, Travis joined the Currency Investment Company in a Lead Generation role initially. Within two months it was apparent there was more to be done and was quickly promoted to Vice President. During his short time Travis has developed different branches of the company including the Fund Partner, Independent Financial Advisor, and Private Wealth models. Within a year the fund saw a 446% growth in assets under management due to these processes.
Actions speak louder than words. With a history of taking companies to the next level we're your partners in positive growth for your business, no matter how out of focus your objective might seem.

There is no magic formula or shortcuts with our process. Meaningful change comes with a commitment to a structured process designed for your growth, both professional and personal.
travis@gibsongrowth.com
7802894601
http://www.gibsongrowth.com
Edmonton, Alberta, Canada
15 Views
0 Rating
0 Favorite
0 Share
You too can build and publish a similar profile page, totally for free. Visit https://profescan.ca/plans/ to create you own profile page, it only takes a few minutes.

If you need help building your page, you can contact us (https://profescan.ca/contact-us/) for more details on how we can help.